Gold mine flotation desilting, these methods are very important

Flotation is one of the commonly used mineral processing methods in gold ore concentrators, but in the process of gold ore flotation, some gold ore raw ore has a large mud content and affects the flotation effect.

When studying how to reduce the impact of ore slime on gold ore flotation beneficiation, we must first understand the ore properties of mud-containing high-gold ore.

For gold ore flotation, too much slime will cause the blockage of the crusher, the quality of gold concentrate will decrease, it will be difficult to filter, the speed of fine-grained flotation will be slowed down, and the selectivity will deteriorate, which will lead to the reduction of gold ore recovery and the flotation process. Selected indicators deteriorated.

In order to solve the above problems, we need to adopt corresponding solutions to reduce and prevent the harmful effects of ore slime according to the properties of different gold ores, and strengthen fine-grained flotation, that is, to adopt suitable technological processes or use targeted flotation Select the drug, the specific measures are as follows:

Ore washing can be described as an important method to eradicate the influence of ore slime on the flotation effect. Vibrating screen washing is added after the first stage of crushing, the ore is washed to remove the muddy part, the screened slime is processed by a spiral classifier, and the returned sand enters the powder ore bin or directly grinds the ore, and the classification overflow can be combined with the grinding product Flotation or individual flotation.

Fractional overflows with very low gold-bearing grades can be discharged directly with the tailings. At the same time, the ore blocks on the washing screen can also be manually selected to remove waste rocks to improve the selected grade. 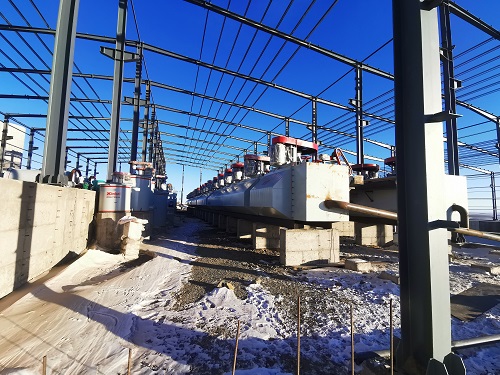 2. Use hydrocyclone to separate part of the slime before flotation

If the gold content in the slime is high, the removed slime can be flotation-treated separately. At this time, the flotation of fine mud alone should adopt a longer flotation time, maintain high concentration pulping, low concentration flotation, and at the same time segmental dosing, increase the amount of collector, reduce the amount of foaming agent, and maintain large aeration Volume, small air bubbles, weaken the ascending slurry flow. And for some slimes that are easy to float and not high in gold content, a small amount of foaming agent can also be added before flotation to remove them by flotation.

Water glass, sodium carbonate, sodium hexametaphosphate and other slime dispersants can be added to prevent the non-selective aggregation of fine mud, so as to fully disperse the slime and reduce the flocculation and covering effect of the slime. In this process, the method of adding drugs in stages may be considered to reduce the harmful effects of a large amount of adsorbed chemicals in the slime.

Use flocculant to selectively flocculate the target minerals or gangue slime, and then separate them by flotation.

Also known as emulsification flotation, fine-grained minerals are treated with collectors, and then oily foam with minerals is formed under the action of neutral oil.