The gravity separation process is suitable for the treatment of coarse-grained and medium-grained siderites, and heavy-medium beneficiation and jig beneficiation are often used. 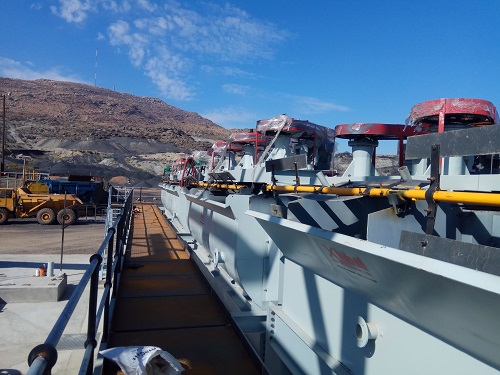 The gravity separation process has large production capacity, low investment, high separation accuracy according to specific gravity, and strong adaptability to the particle size of the selected ore.

Jig beneficiation is based on the density difference of ore. The ore mixture is separated into a vertically elevated, variable-speed media stream.

The jig has the characteristics of simple structure, low investment, high separation efficiency and high recovery rate. Under suitable conditions, about 80% of the waste rock in siderite can be removed.

The flotation process is mainly used for the separation of fine siderite, including two processes: positive flotation and reverse flotation.

The positive flotation process is to grind the siderite to the desired particle size and then desliming. After desliming, the fatty acid collector is added to the neutral or weakly acidic medium to flotate iron minerals (also known as acid positive flotation).

In addition, it is not necessary to de-slime after grinding, just add soda and other regulators, use oxidized paraffin soap and tall oil as collectors, and flotation in weak alkaline medium (also known as alkaline positive flotation process).

Through this beneficiation process, siderite can be converted into magnetite, and then separated by a weak magnetic field magnetic separator to obtain a higher-grade concentrate.